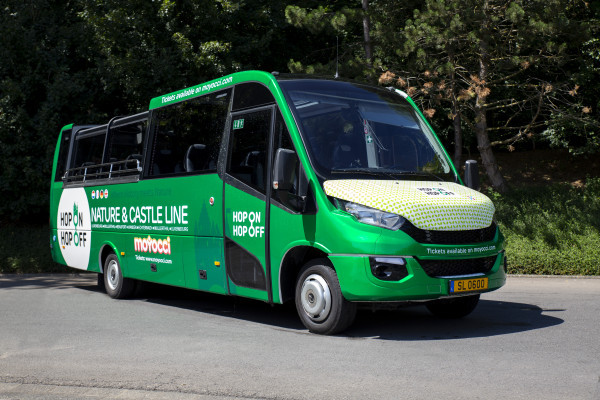 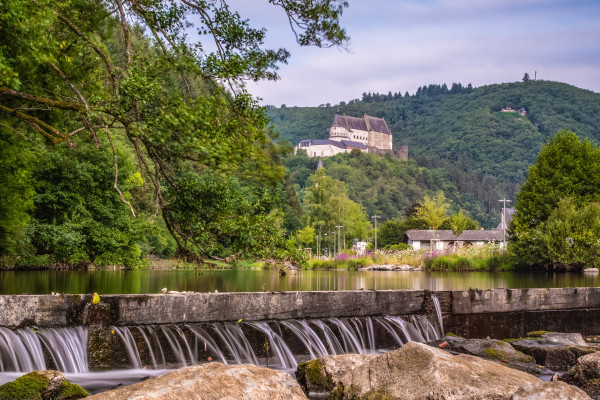 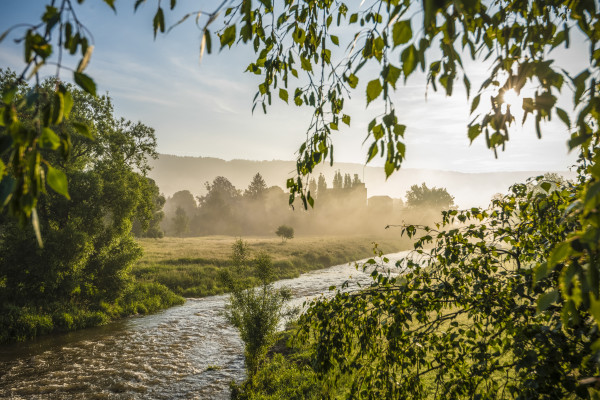 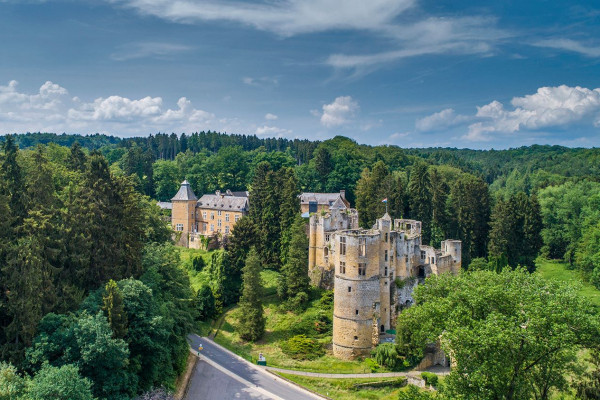 Learn more about the history of Luxembourg, from the Middle Ages to the modern age, aboard our convertible bus. We will show you the fascinating nature of the Mullerthal, "Luxembourg’s Little Switzerland", and take you to the oldest city of Luxembourg.

Customers should be in good physical shape Take good shoes for the walks / especially important in the Mullerthal, Schiessentümpel
Price from
85,00€

The Nature & Castle Tour is a day tour where we will introduce you to the nature and history of Luxembourg. The duration of the tour is +/- 8 hours, which includes 2 hours of free time in Vianden.

Departure from Thursday to Sunday at 9.30 am from Boulevard de la Pétrusse, on the level of BCEE bank.

The waterfall, known as "Schiessentümpel", with its three water jets on the Black Ernz is one of the most photographed motives of the Mullerthal Region - Luxembourg's Little Switzerland. This is a 45-minute walking tour. Please make sure to wear comfortable shoes, especially at the Schiessentümpel.

The medieval castle of Beaufort was built in four different periods, between the 11th and 17th centuries. You can visit the castle if you wish, or explore the area by yourself. After 45 minutes we will move on.

The small medieval town of Vianden attracts thousands of visitors every year. Particularly worth seeing are the imposing castle that overlooks the town, the town wall with its fortified towers and Luxembourg's only chairlift. During our stop you have 2 hours of free time that you can plan for yourself. You may take advantage of the variety of restaurants, visit the castle of Vianden, or take the chairlift.

Echternach is the oldest town in Luxembourg and was founded in 698 by the Benedictine monk Willibrord. Visit the most beautiful places and buildings of Echternach, like the Basilica, the abbey and the market square during a 45-minute city tour.

After visiting Echternach, we will return to the departure point in Luxembourg City.

Katia Pinhal, Product Manager: : Dear Arlete, thank you for your review. We are sorry to hear that the tour did not meet your expectations, usually it's a very likeable product. When it comes to the price, it's fair and everything is taken into account: from the vehicle to driver, included options, guides, etc. Nevertheless, we do hope that you can have a better time on your next trip to Luxembourg, and we look forward to see you. Best regards,
Heike Leichsenring
The tour starts with a ~45minutes stop at Luxembourg's most overrated tourist attraction, the Schiessentümpel waterfall. Normally, participants get to walk there along a probably scenic path above the street, and that may be worth it - in our case, the path was blocked by fallen trees, so we walked along the street to and from the waterfall, so: not great. The next stop, Beaufort, was very good, you get tickets to the castle and the time is sufficient to view it. Alas, in our case some people stayed 20min extra, so we only got 1.5h in Vianden instead of 2. Sounds long? Not if you let people off only on the other side of the town, meaning a 30 minutes walk up to the castle and same time back - you get tickets to the castle, but not anywhere enough time to actually use them (let alone grab something to eat). Even if we had had 2h, it wouldn't have been enough for the castle - extremely disappointing, as Vianden is the most beautiful attraction on the tour. Last stop Echternach, 1h guided tour which was nice, but again, no time to sit down anywhere to eat. If we had known in advance, we'd have brought generous lunch packs; as it was, I got afraid for my dad who's a diabetic. It would make much more sense to go from Beaufort to Echternach and end the tour in Vianden, giving people the chance to just stay longer and return to Lux city by public transport. Also, letting folks off the bus at the street leading up to the castle (which is on the path anyway) wouldn't be that difficult and would give them so much more time with the main attraction. Last, have your drivers announce the return time in multiple languages (not just French), with a sign, and drive off when people aren't back within 5 minutes of the departure time (or build in generous buffer time)! Spoiling the entire group's experience for some stragglers is not fair.

Katia P., Product Manager: : Dear Heike, we thank you for your review and we regret that you didn't have a pleasant time during the Nature & Castle Tour. Our team has planned the tour, and stops at each location with the only purpose to provide an authentic and pleasant moment for visitors. Indeed, it might happen that the drive-time takes a bit longer than scheduled. However, the stops are set from the beginning (as for Vianden) not to mention that the shuttle bus can not drive up to the castle due to the conditions of the road. In addition, it would not make sense to put Vianden as a last stop simply for logistical reasons. We acknowledge the fact that you might encounter a driver who is not speaking an other language, other than French. We sincerely hope that you can plan a new visit to Luxembourg and try out another of our activities. Best regards, The Moyocci / Sightseeing team
Alini Bunn
O passeio foi muito bom. O motorista falava também português, o que nos auxiliou bastante, especialmente em Vianden. Em duas partes do passeio (Mullerthal e Echternach) haviam guias, que falavam em inglês. Em Vianden, o motorista nos levou diretamente até o teleférico (pago a parte) e até a entrada do castelo de Vianden. Em Echternach, a guia poderia ter dado um pouco mais de tempo para batermos as fotos.
Stuard Brager
Itinerary to the Beaufort and Vianden castles, Echtenach old town and Schiessentumpels waterfall is excellent! Bus transportation was also excellent and safe. Both local tour guides at Schiessentumpels and Echtenach were excellent, especially the woman at Echtenach. Pitfall is that driver did NOT speak English and therefore could not answer our questions. During the Vianden Castle 2 hr stop, we asked with no answer where the chairlift starts. Driver dropped us at the bus station with no explanation. We wasted ~20 mins trying to find the chairlift and walked an extra 1 km, losing valuable time exploring up at the castle and having lunch. Otherwise - a great tour!

Katia Pinhal - Product Manager : Dear M. Brager, thank you so much for your great review. Your feedback is very precious to us, and we will make improvements thanks to you. We are very sorry to hear that your questions were not responded by our staff member (driver) that day. The fact is, we are a multi-cultural country and we try our best to find multilingual staff. Nevertheless, your review shows us that you had a great time despite that little disadvantage. We hope to see you again in Luxembourg. Best regards,
Raquel Godinho
Overall it is a really nice tour for those looking for a quick experience outside de city, enjoy the countryside, get amazed by the Müllerthal waterfalls and learn about luxembourg's history! However I would rather to have more free time to explore the Echternach village on my own. It is still a really nice tour with friendly and funny staff. I highly recommend it! It would be nice to have similar tours but with different routes.